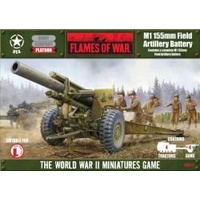 The devastating US big guns of the 155mm Field Artillery Battery will have to be a consideration to any US commander creating a force from Cobra.

Development of the 155mm Howitzer M1 began in the late 1930s, when the U.S. Army determined it needed a new medium field artillery piece to replace the WWI vintage Howitzer M1917. The carriage and recoil of the M1 155mm howitzer was also used for the 4.5 inch Gun M1, which proved not very popular. The howitzer first saw action in North Africa in 1942.

The 155 used "separate loading" ammunition comprised of four components: a projectile, a separate bagged propellant charge, a fuse and a primer.

The propelling charge contained individual bags of powder, which could be reduced to adjust for range of fire.

The howitzer had a range of 16,000 yards, more than 3,000 yards further than the M1917 howitzer. The tractor for the M1 155mm howitzer was the Diamond T truck, but the M5 high-speed tractor was also used when available.

The Field Artillery Battalions operating with the US 2nd Armored Division were from the 22nd RTC of the 4th Infantry Division. Each infantry division had four field artillery battalions. The one battalion was equipped with three batteries, each with four M1 155mm howitzers.

The other three light artillery battalions had a combined strength of 54 M2A1 105mm howitzers.

With a frightening 88”/220cm range and an anti-tank 5 and 2+ firepower for bombardments these giants of the battlefield will quickly send Axis heavy tanks ducking for cover. However when choosing to field these big guns you will have to also have a M2A1 105mm howitzer armed Field Artillery Battery first.

This is not necessarily a drawback as the 105mm is not a weapon to be sniffed at. The rule:

Used in combination your enemy will think twice before exposing his platoons to this devastating firepower.

See Cobra page 70 for full rules. We will also have an article on using the M1 155mm howitzer armed Field Artillery Battery with other forces within the next few weeks.