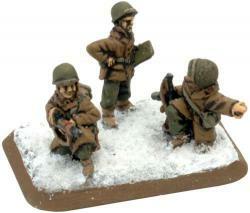 The 81mm M1 Mortar was based on the French Brandt design developed during WWI. The US government purchased the manufacturing rights to the mortar in the late 1930s and began production. The small mortar could be broken down into its three basic components for transport: the tube, the mount and the baseplate. The 81mm mortar’s range varied depending on the type of shell used, up to a maximum of 3,290 yards.

To fire the projectile it is dropped down the barrel, fin end first, the primer strikes the fixed firing pin which detonates the primer and ignition cartridge (inserted in the base of the round), which in turn ignites the propellent increments, forcing the round out of the barrel, carrying the primer and cartridge with it and readying the mortar for the next round.

Comparing weight and size of the weapon to the destruction they delivered to the target, mortars are very efficient. As ’the infantry’s artillery’, they provided small infantry units artillery-like fire support when artillery either was not available, or could not be moved forward fast enough.