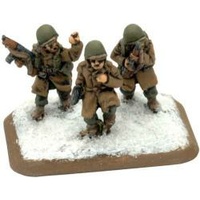 US Parachute Rifle Platoon winter US727

All Parachute Rifleman are volunteers. They are some of the best motivated, best trained, best paid, and the best dressed troopers in the US Army. Parachute Rifle Companies are the bravest of the brave.

Due to the haste of their departure from Mourmelon camp, there was a shortage of weapons among the men when the 101st Airborne arrived at Bastogne. Additional weapons were taken from retreating 28th Infantry Division soldiers and found discarded along the roads. Eventually, the platoons became fully equipped, but some Parachute Rifle Platoons entered combat without their full complement of weapons.

With the best equipment going around including M1 Garand rifles, gammon bombs, light air cooled M1919A4 machine-guns, an M1 Bazooka, M2 60mm mortar, a smattering submachine-guns and a never say die attitude, these guys are ready to take on all comers.