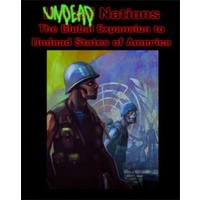 Radio messages crackle across the airways, French struggling to communicate with Russian. A group of Brazilians float in the southern Atlantic helplessly out of fuel while a team of Chinese scientists struggle to keep up with the Australian scouts up ahead on their way towards an Indian armory.

While the focus of the core rulebook, Undead States of America, was obviously the United States and North America, the Zombie War is a global one.

This expansion of the basic rules provides new types of terrain for the campaign games, including deserts, swamps, jungles, dense urban populations, and radioactive wastelands.

It also includes detailed maps and rule modifications for other regions on the planet and how to fight the Zombie War raging across the world.