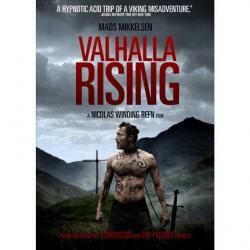 Acclaimed Danish director Nicholas Winding Refn follows his worldwide smash Pusher trilogy and the widely praised Bronson with his most daring film yet. Valhalla Rising is a brutally beautiful Viking film with international star Mads Mikkelsen (“Casino Royale,” “Clash Of The Titans”) as One Eye, a chained prisoner forced to fight to the death for the entertainment of his captors.

When One Eye escapes, he stumbles upon a group of warriors headed to the Crusades. But fate has something else in store, as the men drift into the New World, where savages stalk them one by one in increasingly violent ways. Is One Eye an avenging angel or just the guiltiest of them all? The answers can be found in this ruthless, hallucinatory, one of a kind journey.