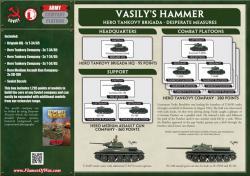 Lieutenant Vasily Bryukhov was leading his battalion of T-34/85 tanks through a cornfield in Romania in August 1944. The field was crisscrossed with tank tracks. As they were driving along, Vasily caught a glimpse of a German Panther on a parallel track. He ordered a halt, and followed the path of the Panther until it met another track left by a tank. When the Panther appeared in the gap Vasily’s gunner put a shell through the Panther, which burst into flames.

After encountering the Tiger and Panther tanks at Kursk, it was decided that the T-34 needed to be upgraded. This was done by creating a new turret that allowed an extra crew member to be added and replaced the 76mm gun with an 85mm gun, creating one of the most successful tanks of the war. With a three-man turret, the commander was free to command the tank, leaving the operation of the gun to his gunner and loader.