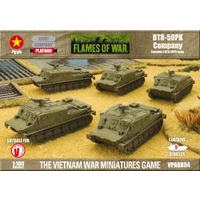 The three companies of a North Vietnamese armoured battalions were often equipped with different types of tanks. At first this was due to a shortage of modern tanks, but later combinations of tanks, amphibious tanks, and armoured personnel carriers allowed a battalion to undertake whatever role was assigned it without further support.

Most armoured battalions include a đại đội cơ giới bộ binh (pronounced dai doy kur vay boh beeng), or mechanised infantry company. These operate Soviet BTR-50PK xe thiết giáp chở quân (pronounced ser tee-et harp chur kwun) armoured troop carriers. Their role is to use their mobility and armour to advance close behind the tanks, then dismount and assault on foot covered by fire from the tank’s guns. Their high proportion of B41 anti-tank weapons means that they can defend themselves if attacked by enemy tanks.