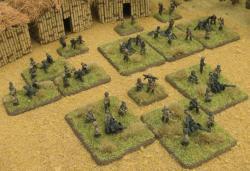 Equipped with an array of different armaments for a diverse number of roles; the PAVN Divisional Support was armed with equipment that was either Chinese copies of Soviet equipment or actual Soviet-made weapons.

For example, the Type B10 82mm recoilless gun was Soviet-made and much more modern than the WWII-era 75mm examples used at the regiment level and provided a better anti-tank capability. While the Type 53 120mm mortar were copies of the Soviet 120-BM-38 heavy mortar and were capable of firing a round more powerful than the American 105mm howitzer.

Perhaps no piece of equipment was more important than the ZPU-1 14.5mm gun, more powerful than the Type 54 12.7mm Anti-aircraft machine-gun.  These guns posed even more of a threat to the helicopters the American forces relied upon for mobility, firepower and supply.