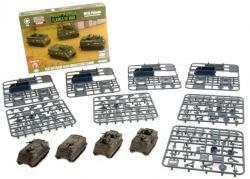 Extensively used in Vietnam, the M113 proved to be a solid workhorse capable of breaking through heavy jungle and transporting infantry through to enemy positions.

The M113 APC (armoured personnel carrier) was developed to fill the same role as the WWII M3 half-track carrying infantry up to the edge of the battlefield safe from artillery and long-range fire.

In Vietnam the mechanised infantry battalions used their M113 ‘tracks’ much more aggressively.

The M113 with M134 minigun in Flames Of War Vietnam

The M113 ACAV in Flames Of War Vietnam