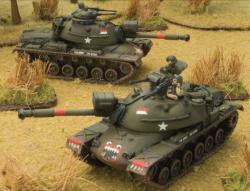 The M48 Patton tank was completely modernised version of the WWII M26 Pershing heavy tank, designed to fight Soviet tanks on a nuclear battlefield. Oddly, many of the lessons of WWII had been forgotten and the M48 lacked
a stabiliser and was likely to catch fire when penetrated. Its impressive anti-tank capability was of little use in Vietnam.

Much more useful was the M336 canister round, popularly known as ‘beehive’, filled with 1281 steel pellets that turned the tank’s main gun into a giant shotgun. The crews often moved the commander’s machine-gun from inside the cupola to on top of it, added another for the loader.

The M48A3 tanks went just about anywhere in just about any season, and their firepower proved decisive in battles like the relief of Fire Support Base Gold. There the tanks led a relief column through dense jungle and arrived, guns blazing, ‘just like the late show on TV, the US Cavalry came riding to the rescue’.