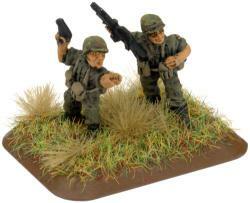 The airmobile company fields three rifle platoons under a captain, supported by a mortar section in the company headquarters; all transported and supplied by helicopter.

Rifle platoons in Vietnam were never up to strength. Between soldiers off sick, those on leave, and casualties waiting to be replaced, a ten-man squad was lucky to have eight men available on any given day. Each squad had two teams, each with an M79 ‘Blooper’ grenade launcher for additional firepower. Although the riflemen were armed with the new M16E1 automatic rifle when they arrived in 1965, they were trained to fire single shots except in emergencies.