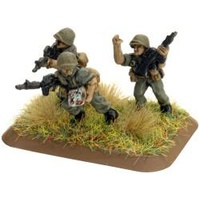 The Army of the Republic of Vietnam retains the older style of organisation with its machine-guns, bazookas, and light mortars grouped into a company weapons platoon rather than being part of the rifle platoons.

The new M20 Super Bazooka is an updated 3.5-inch (89mm) version of the original 60mm Bazooka used in the Second World War. The increase in calibre gives it a significant increase in punch.

While originally conceived as an anti-tank weapon, the light-weight M18 57mm recoilless gun is more useful as a light infantry gun. Light enough to be carried by its crew, the M18 can be carried into the densest jungle or across flooded paddy fields, ready to knock out dug-in VC machine-gun teams and bunkers.