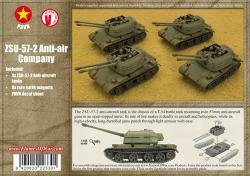 The ZSU-57-2 was a Soviet built self-propelled anti-aircraft gun that first came into service with the Red Army in 1955. The acronym ZSU stands for Zenitnaya Samokhodnaya Ustanovka, which when translated means anti-aircraft self-propelled mount; 57 designates the calibre of the weapons and 2 states the number of gun barrels.

Built on the chassis of the T-54 tank, the twin S-68 57mm cannons were mounted in an open-topped turret which only offered the crew inside a minimum level of armour protection. Manned by a crew of six (driver, commander, gunner, dedicated sight adjuster and a pair of loaders), the ZSU-57-2 was limited to only engaging aircraft that the crew could actually see.  Once an aircraft was spotted, the sight adjustor had to correctly calibrate the gun sight before the target could be engaged; making the vehicle virtually useless during night time operations.

The war in Vietnam was the first recorded service for the ZSU-57-2 in a combat zone. But the North Vietnamese quickly learnt that the ZSU-57-2 was just as effective in providing fire support for infantry attacks as it was sweeping the air of enemy aircraft.