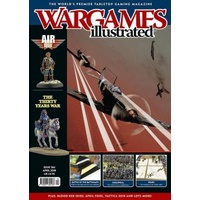 Wargames Illustrated - ISSUE 366 April 2018
Description
Observation Post
A special focus on what we picked up at Vapnartak in York this month.

Jim Graham provides some advice for gamers looking to invest in a new period or army for use during this fascinating period.

Jim Graham is back, switching periods to look at some of the less glamorous aspects of being a ‘Knight of the Air’ during World War One.

Simon MacDowall examines the wargaming potential of the Franco-Spanish conflict in the Thirty Years War.

The drone of engines, the twists and turns of aerial combat - we tried out one of the scenarios and aspects of the expanded rules from the upcoming Blood Red Skies with game designer Andy Chambers.

Whilst America had the X-Men and Spiderman, the Brits had more ‘realistic’ heroes, whose stories were told against the backdrop of real warfare. Steve Beckett tells us more about - Johnny Red.

Pete Brown embraces an April tradition, but can you tell the historical truth from the alternative facts?

Aerial Warfare over North Vietnam 1965-72. John F. Stanoch discusses this aspect of the war in Vietnam and presents some gaming ideas and a scenario.

Although the ‘Suez Crisis’ resulted in a humiliating climb down by Britain and France, the military operation itself succeeded and featured the first example of an assault never before used in combat.

We take a look at a number of battlemats from different companies, along the way charting their evolution and merits.

James Morris takes the 12mm version of his 2017 wargames project (featured last month) to war on a larger scale - 54mm!

The latest supplement for Hail Caesar from Warlord Games covers the Dark Ages or ‘Early Medieval’ period, with new special rules and updated army lists - we try them out with HC author Rick Priestley.
Modelling: Druid
A look at the creation of our Salute 2018 gaming table.
Show Report: TACTICA 2018
Our travels take us to Hamburg once more, and this excellent showcase of Germanic wargaming talent.