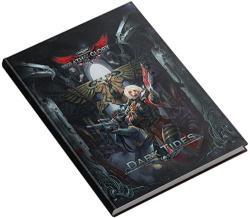 The ocean world of Charybdion seethes with discontent and a growing sense of danger.

Dark Tides is an anthology of five linked adventures that bring your heroes face-to-face with the dangerous villains responsible for Charybdion’s troubles. Can your heroes confront the vile forces spreading insanity and corruption?