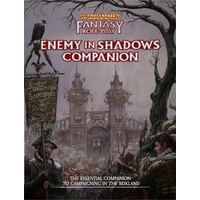 Warhammer Fantasy Roleplay: The Enemy Within - Enemy in Shadows Companion The Enemy in Shadows Companion is the first of a 5-part series of companion volulmes to the Enemy Within campaign. It contains a wealth of supplementary material to not only expand Enemy in Shadows, but also support any WFRP games set in the Empire.

The Enemy in Shadows Companion is an essential supplement to the first part of Enemy Within campaign, and to roleplaying in the Reikland as a whole, making it a vital addition to any WFRP collection.