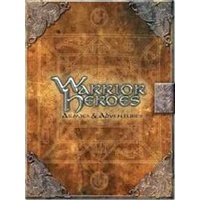 Warrior Heroes combines the best of wargaming miniatures with the personal touch of role-playing. The combat system is best described as intense yet simple in mechanics. Combat takes center stage, as when you enter combat there’s no guarantee that you’ll survive. That’s what makes it intense.

Added to this is a simple-to-use campaign and battle-generator system that can give you the who, what, and why of your adventures. Within minutes the mechanics can generate a complete adventure, down to the motivation and actions of the enemy forces. All without a game master, because in Warrior Heroes everyone plays, not just watches.

The game also works on two other levels. The first is the personal level, where each player creates and controls a character. He recruits a group and leads it on adventures, gaining experience and abilities as he advances in reputation.

The other level allows for fighting battles with large armies. Using the Big Battle rules, you can easily push large numbers of figures about the board in a reasonable time and to a conclusion, then tie the results to your personal characters.

In short, Warrior Heroes can be anything you want it to be, from a role-playing game to a big battle game and anything in between.