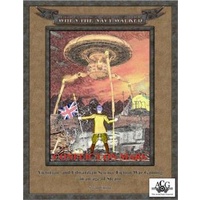 When the Navy Walked: Conflict on Mars

When the Navy Walked: Conflict On Mars is a miniature rules set that covers an alternate history set during the colonization of the Red Planet of Mars by the Great Powers. As the Great Powers vie for control of the planet’s few resources and the Red Planet’s native Red, Green and White Martians make tenuous treaties with them, something older stirs in the depths of the planet.

Something dark and terrible that has been hidden for eons in forgotten crèches locked in a stasis of bloody dreams of conquest.


The Overlords are awakening from their deep slumber and returning to the planet’s surface once again! The Gray servants of the Skvani are gathering their Tripod War Machines! The future of Mars bears dark days of war!