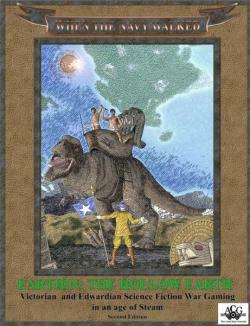 When the Navy Walked: Earthin & Atlantis

Deep beneath our very feet lies the world of Earthin. A Hollow-Earth that is home to the lands and creatures of the past. Fierce and cunning beasts and lost civilizations bring untold adventure to those brave enough to attempt to tame its wildness.

The Atlantians and Lemurians jealously guard their technology and wage secret wars using the lost people as their armies while the Devlyn wait from their cloud cities sharpening their claws for a final showdown with the Skvani of Mars. Visit the lost kingdoms of Roma Secondus, The Holy Egyptian Empire, The Lost City of the Aztecs, The Thunderbird people and other lost kingdoms - forgotten in the sands of time.

Earthin: The Hollow Earth features armies for the Lost Civilizations, The Atlantians and Lemurians as well as rules for dinosaurs and combat in the wilds of the world beneath.

*Note* Earthin: The Hollow Earth is not a stand-alone product and a copy of When the Navy Walked Core will be required to play the game.