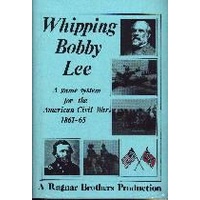 Not a game but a set of rules for figure gaming in the American Civil War period.


If you've tried other sets of rules and found them cumbersome, over complicated and very time consuming, you'll be pleasantly suprised with Whipping Bobby Lee. It provides a command system that captures that sense of 'not being able to do everything that you'd like at once' and focuses you on to making decisions about how to prioritise your needs given that you've a shrewd idea of what the opposition might be likely to try.

The rules can be used for one off battles or you can use the Campaign system to orchestrate a series of  encounters.

You'll love the Rebel veterans by the way, but they are expensive so don't go thinking you can have an entire army of them.