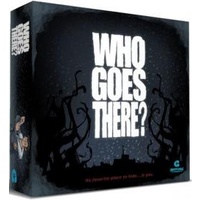 Grab what buildables you can and make a weapon. If staving off hunger pains and avoiding an avalanche wasn’t enough, you’ve got a dog attack on your hands, and that boiler is about ready to blow. Your friends need Canned Food for the next round, and you dare not sleep alone on the bunk round coming up. The only way out of this ice-hole is on that helicopter you don’t know how to fly, conveniently enough.

Step Out Into the Cold

You have two ways out: in a body bag or on the helicopter. If you want to fly that helicopter though, you’ll need to go outside the camp to find maps, fuel and other bonuses, but the Thing is out there too. If you’re not careful, the Thing will leave you vulnerable, if not infected.

The more vulnerable your friends become, the less you can trust them. You can’t afford to let the Thing get on the helicopter with you, or it’ll infect the whole world. I mean, unless you yourself become the Thing, then by all means, hop on and doom the human race.

Who Goes There? is a cooperative game of growing paranoia. At the beginning of the game, all players are human and there is no reason not to fully trust the other players. As the temperature drops and mistakes are made, players start to doubt everything and everyone around them.

You must build, trade, and upgrade to better your chances of surviving the perils of the camp, and the alien entity that is now running loose.

Players must survive the elements and escape on the helicopter. and hope that anyone else on board is who they appear to be.