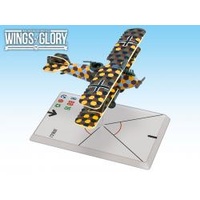 UFAG C.I (161–37)
In an attempt to improve UFAG’s firepower against enemy fighters, a second forward–firing machine gun was experimentally added to this airplane. This model has special cards to reflect the upgrade