Albatros D.III (Frommherz)
Hermann Frommherz went from 2-seater pilot to the famous Jasta 2, where his first fighter was the “Blau Maus.” He survived World War I with 32 victories. 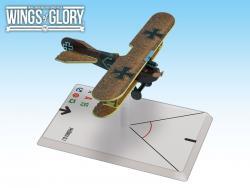