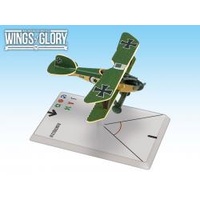 Albatros D.III (Gruber)
Kurt Gruber’s first victory came with the Austro–Hungarian ace Godwin Brumowski manning the guns in his Albatros 2–seater, and they fought together again in this D.III in Flik 41J.