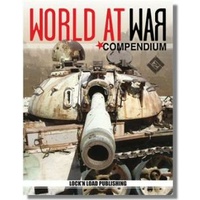 Friends of the company have been asking for something like this for quite a while, and we finally were able to make it happen. The “it” that we are referring to is the World at War Compendium --over 100 pages jam-packed with World at War scenarios, analysis and articles…. Not to mention new maps and 88 new, die-cut counters.

The Compendium includes every World at War scenario and most World at War articles published in the first seven issues of Line of Fire. Why only most articles? We figured you didn’t need to read a Blood and Bridges preview. Additionally the Compendium includes over 30 pages of new material including two new scenarios, a guide to Soviet player tactics, and the long-awaited World at War timeline. Additionally, there are five 8.5” x 11” 14pt card stocks maps, which include all the WaW maps published in LoF and two new maps. But wait a minute, that isn’t all. There are 88 counters, which include counters from Line of Fire 1-7 and new Syrian and Israeli counters--did we mention that these are die-cut counters?