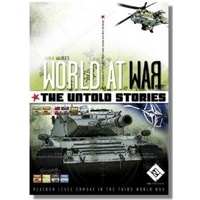 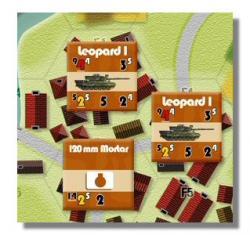 World at War : The Untold Stories

By now you know the tale of the Soviet thrust through the Eisenbach Gap, learned how the red horde destroyed the best the Bundeswehr could throw against them, and read the story of the Russians bold seizure of the Rhine River bridges. But there are many more tales tell before the communist forces encircle Paris. Tales that were heretofore untold. Gather round the blazing tank, it's the summer of 1985; welcome to the next exciting chapter in the dark world of Mark H. Walker's World at War.

World at War: The Untold Stories recounts the struggle of Warsaw Pact and NATO allies previously not covered in World at War modules. Included are the battles of the Canadians, East Germans, Poles, Dutch and Belgians as each fought desperately to survive in the opening days of the war that ended all wars.

Battle over a plethora of new terrain. The Untold Stories contains three 11” x 17” geomorphic, mounted maps that not only give variety to the game’s scenarios, but can be used by gamers everywhere to create their own World at War stories.

Twelve, spanking new scenarios. Canadians versus Poles, East Germans versus Danes, Belgians versus Russians. It’s a veritable smorgasbord of war. Fight with the Canadian 31 Brigade Group as they valiantly battle Soviet T-80s with their Leopard I tanks, or command East German T-72s as they fight their West German bretheren.

Units represent platoons of vehicles, such as T-80, T-64, BTR-70, BMP-2, FV-432, Challenger 1, Rapier, SA-13, ZSU-23/4, helicopters – Lynx aRate TUS on BGGnd Hind E, aircraft – Su-25 and Tornado, and infantry armed with support weapons such as Spandrels, SA-16s, Milans, Blowpipes, AGS-17s, etc. The system throws typical turn-based gaming out the window. The platoons are grouped into formations (companies for NATO or battalions for the Soviets) and lead by a headquarters unit. Each unit of the formation must be within range (generous for NATO, less so for the Soviets) of the HQ to activate with its formation. Oh yeah, individual units might activate, and recon units can double their range from the HQ, but you’ll want to keep those formations together. The formations are activated by chit draw, and better-trained, better-led units can activate more than once in a turn, moving, shooting, and fighting in each activation. On the flip side of a coin, there is no guarantee that a formation will activate even once. The opaque container (we like to call it a cup in the rural south) into which the formation chits are placed is seeded with end turn chits. When the second end turn chit is drawn, the turn ends. Doesn’t matter if anyone has activated; the turn is over.


Combat. We love this combat system. When attacking, each platoon rolls a number of dice equal to its firepower. Every die that equals or exceeds the “to hit” number (right superscript) hits the target. The target then rolls the number of die equal to its armor factor plus terrain advantages. Each die that equals or exceeds its armor factor negates a hit. The first hit disrupts a unit, second reduces it, the third eliminates it.

Units may also close assault, entering the opponent’s hex to either deal a death blow or force him (or her) out of valuable terrain. Same procedure, but both units use their close assault value. The side that takes the most hits must retreat from the hex. Infantry is VERY good at this, especially against armor without its own infantry support.