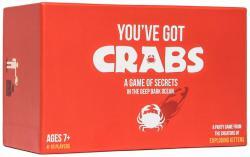 You've Got Crabs (With free expansion!)

Create an advantage for your team and look like a crab doing it!

How to play You've Got Crabs:

Form teams of two players each (max of 5 teams). Each team meets privately to come up with a non vocal signal to indicate when either teammate collects 4 of the same Crab Card.

Each player gets a hand of 4 cards. One side plays at a time. On a side’s turn, all players on that side can simultaneously swap any card from their hand with a card from the middle of the table (The Ocean).

When you have 4 of the same Crab Card, you can't say anything out loud. Instead, when you’re ready, give your secret signal to your teammate. When they notice, they will point at you and shout, 'YOU’VE GOT CRABS!'

However if a player on another team suspects you’re passing a signal, they can point and shout, 'YOU’VE GOT CRABS!' If they are correct, they steal one of your points. If they are incorrect, steal a Crab Token from the accusing player.

The game is over when the last Crab Token has been taken from the Crab Pot. At that point, all teams should count up their combined Crab Tokens. The team with the most Crab Tokens wins.