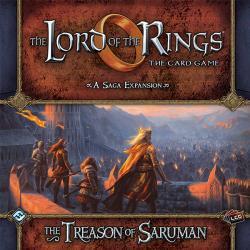 The Lord of the Rings LCG: The Treason of Saruman The Lord of the Rings LCG: The Grey Havens The Lord of the Rings LCG: The Land of Shadow

Having caught up to the Corsairs' Stormcaller after a harrowing pursuit across troubled seas, several of Middle-earth's heroes prepare to lead a boarding party in order to reclaim the Númenorean artifact the Corsairs had stolen. However, their battle with the seasoned Corsair warriors is only the first act in a scenario that quickly spirals into nightmare when the waters beneath the Stormcaller begin to churn and massive, tentacled arms erupt from the sea to grapple the ship and the sailors aboard it!

The sixty new cards in The Thing in the Depths allow you to determine the course of the resulting battle, even as they introduce a new Spirit hero and three copies each of eight different player cards, including innovative new allies for each of the four spheres. Will these new allies add enough strength to your fellowship to help you survive your high-seas confrontation with an incomprehensible monster? Will they prevent you from seeing the Stormcaller ripped to pieces beneath you or keep you from being flung into the turbulent waters? You'll need every ounce of your strength to survive… You'll even need the aid of the Corsairs you were fighting!

A Scenario of Two Halves

Even as it offers you the chance to participate in deadly, high-stakes battles, the scenario from The Thing in the Depths reaches into new territory with the Grapple keyword and a dramatic shift in tone between its two main acts.

Then, after you watch these brutal fighters cut down your allies, the whole scenario changes tenor as the first massive tentacle rises from the waves and lashes around the ship's mast. Other tentacles follow immediately, writhing out of the water to rip sailors from their footing, to grab at parts of the ship, and to punch through its hull. In no time, the Corsairs that you were fighting are willing to forge a necessary truce so that you may fight together against the unknowable Creature that threatens to rip apart the very vessel upon which you stand.

In The Thing in the Depths, the Grapple keyword represents the terrible threat that the scenario's gigantic sea beast poses the Stormcaller and all who stand aboard its decks. When an enemy with the Grapple keyword enters play, it is immediately attached facedown to the location indicated by the parenthetical text associated with its Grapple ability. For example, a Grapple enemy might attach to the location with the highest Threat, the one with the fewest quest points, or the one with the lowest Threat. Regardless of the location to which the Grapple enemy attaches, though, it ends up increasing that location's Threat by two.

While you might think that could simply ignore these enemies by increasing the Willpower you commit to the quest each round, you can't allow the Creature to continue grappling and ripping at the Stormcaller because if any Ship location ever has its Threat raised to nine or higher, the ship rips apart, everyone aboard tumbles into the sea, and you lose.

Accordingly, you must detach the monster's many tentacles from the locations they're grappling. To do so, you must either fully explore the locations they're grappling or travel to them, making a grappled location the active location. Whenever a grappled location becomes the active location or is explored, the enemies that were grappling it are detached, flipped faceup, and added to the staging area as normal enemies… You heroes will no longer have to battle these enemies off of the ship; they'll simply find their enemies' full attention directed at them instead!

Allied by the Common Cause

Almost as much as it presents a terrifying struggle against a monstrous denizen of the deeps, The Thing in the Depths is simultaneously an Adventure Pack about alliances. Not only does it introduce impactful new allies into each of the four spheres, but it affords you the rare opportunity to side with a couple of characters who were just previously your foes.

Of course, it's not best to rely upon the talents of a notorious Corsair and Raider for your survival, and you might want to incorporate the new ally version of Sam Gamgee (The Thing in the Depths, 35). For three resources, he provides a fair return of two Willpower, with the ability to boost up to three Willpower – as well as two Attack Strength and Defense Strength – anytime you are forced to raise your threat. Naturally, Sam is even better when you have Frodo in your fellowship, in which case he costs you just a single resource, and if your Frodo is the spirit hero from Conflict at the Carrock (Conflict at the Carrock, 25), then you gain a built-in way to raise your threat to ready Sam and boost his stats.