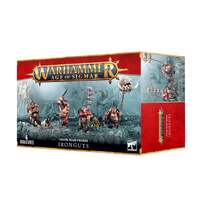 Ironguts go into battle armed with massive two-handed weapons, be they enourmous scimitars, rocks bolted to tree boughs with iron bands, or simply gigantic versions of the traditional ogor club. They are armed with the best weapons, equipment and armour. This armour is sometimes made specifically for that Irongut, though most of the time it is simply made up of looted shields and chunks of armour from their fallen foes.

This multi-part plastic set contains 110 components with which to build four Ironguts armed with mighty bashing weapons. The set comes with plenty of optional extras including armoured heads, and plenty of scavenged shields to protect them. It also includes enough components to build a Gutlord, a Rune Maw Bearer and a Bellower.

These models are supplied with four 40mm square bases and they are supplied unpainted and require assembly - we recommend using Citadel Plastic Glue and Citadel Paints.