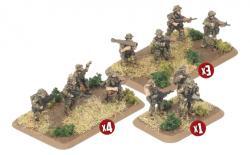 Includes one Formation Commander SLR rifle team, four M60 teams with LAW Anti-tank weapons, three Carl Gustav anti-tank teams, seven medium four-hole bases, one small two-hole base, one small three-hole base and four Unit Cards.
The 5/7th Battalion, Royal Australian Regiment is the only mechanised battalion in the Australian Army and is the largest mechanised battalion in the world at this time.
The battalion is made up of four rifle companies, totalling twelve infantry platoons, an admin company and a support company with antitank, assault pioneer, machine-gun and sniper platoons. Each rifle platoon is armed with three M203 grenade launchers, six M16 assault rifles, three Carl Gustav, four M60 GPMG (General Purpose Machine-guns) and 18 SLR (Self-loading Rifles), along with M72 LAW (Light Anti-armour Weapon), or SRAAW (Short Range Anti Armour Weapon) as they are called in the Australian Army.

These are organised as a headquarters with the platoon commander, sergeant, and two riflemen, along with three sections of nine ‘Diggers’. In practice, each rifle section consists of a command group with MDFSW (Medium Direct Fire Support Weapon, or 84mm Carl Gustav anti-tank weapon) and a ‘Gun Group’ with an M60 GPMG. Only in wartime would there be so many Carl Gustavs, the ‘Charly Gutsache’ as the troops call it affectionately, are limited to two per company in peacetime!