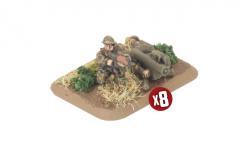 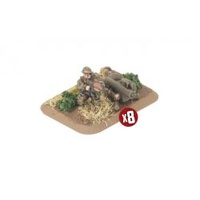 Milan Section (TAU704)
Includes eight Milan missile teams, eight small two-hole bases, and two Unit Cards.
The Milan missile is a modern man-portable, light anti-tank missile. Its small size makes the missile team easy to dig in and conceal, yet it can penetrate most tanks.
Despite the Australian Defence Force being an early adopter of missiles such as the ENTAC (a French ATGM adopted in the 1960s), the Milan missile system hasn’t entirely replaced the 106mm Recoilless. Its heavy weight has meant that cavalry and mounted units are the main users of this system. Crews prefer to operate near vehicles rather than manually carrying reloads.