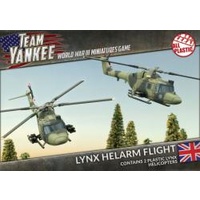 The TOW Lynx mounts the US Improved TOW anti-tank missile for the HELARM (Helicopter, Armed) operations. The Lynx is fast and aerobatic, making it ideal for the anti-tank role as it can fly below tree-top level to sneak into position, then pop up using its roof-mounted sights to acquire targets and destroy them with its missiles.

Western attack helicopters have mastered the ability to strike quickly from cover and pull back before enemy AA can shoot them down. Find a quiet part of the battlefield for them to lurk and use their TOW missiles to initially destroy enemy anti-aircraft assets, then turn your attention to the tanks and smash them with impunity.

During the lead-up to the war the 6th Armoured Brigade was converted to the 6th Airmobile Brigade. Under the new structure, the Gordon Highlanders were reorganised to have a much higher allocation of Milan antitank guided missiles and had their other equipment lightened to make them easily transported by helicopters. These new airmobile platoons could be quickly moved to blunt enemy attacks or mount swift counter attacks.

Using the mobility of the Lynx transport helicopter, you can threaten (or even seize) objectives forcing the enemy to keep troops in reserve. Thanks to the high proportion of Milan anti-tank teams in the formation (up to 14) you can even stand up to an enemy armoured assault. Should the enemy achieve a breakthrough you can quickly reposition some of your troops anywhere on the table to meet the new threat.