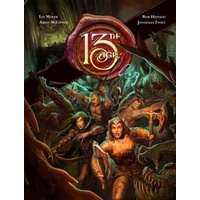 In the 13th Age of the world, adventurers seek their fortunes in the Dragon Empire while powerful individuals known as Icons pursue goals that may preserve the empire from chaos, or send it over the edge.

Players decide which Icons their characters ally with, and which ones they oppose. These relationships, along with a personal history and a unique trait chosen during character creation, help define an adventurer’s place in the world of 13th Age and lay the groundwork for epic stories that emerge through play.

There are also fun new rules for hitting orcs and making them go splat.

Designed for experienced GMs and any type of player, 13th Age offers a fresh take on a familiar tabletop experience. Pelgrane Press gave Rob and Jonathan total freedom to create the game they most wanted to play. They brought the best parts of the great d20-rolling fantasy tradition together with innovative new rules, resulting in a game that EN World readers named “2013’s Most Anticipated RPG”.

Play 13th Age as a standalone game, or use it as a source of cool ideas and add-on rules for make your favorite RPG. This 320-page core rulebook features: