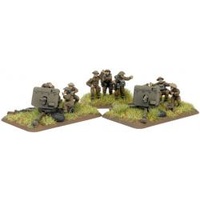 
Each division in the BEF has its own Anti-tank Regiment from the Royal Artillery. These have four batteries, each with twelve anti-tank guns in three platoons. These were positioned across the divisional front to prevent armoured breakthroughs.

The anti-tank gun used was the excellent Ordnance QF 2 pdr, a high-velocity 40mm weapon capable of penetrating any German tank at combat ranges. Once emplaced, the 2 pdr gun’s uniquely-designed three-legged carriage allowed it a 360-degree traverse and provided excellent stability. The OQF 2 pounder was considered one of the best anti-armour weapons of its day, easily outperforming its German counterpart, the 3.7cm PaK36 gun.