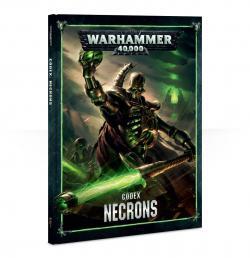 The Doomsday Ark is a technological wonder, easily eclipsing the primitive energy weapons of the Imperium. Even fired at low power the doomsday cannon is ferociously destructive; when firing at full effect, its searing energy beams burn many times hotter than more conventional plasma weaponry. Infantry caught in the doomsday cannon's fury are obliterated instantly; armoured vehicles reduced to glowing slag. In the face of a shot from a doomsday cannon, nothing less than a Titan's void shields can hope to offer anything more than a fool's hope of protection.

Ghost Arks are often pressed into service as conventional transport vehicles, conveying reinforcements to some vital area of the battlefield, or allowing Necron forces to attack from an unexpected quarter. The enemy's predicament is made all the worse by the fact that Necrons deployed in this fashion are, to all intents and purposes, accompanied by their own mobile repair station, for the Ghost Ark can fix even those Necron Warriors that are too badly damaged to repair themselves. Only by destroying the Ghost Ark can the foe have any hope of victory.

This multi-part plastic boxed set contains 168 components with which to build one Necron Ghost Ark or one Doomsday Ark. If you're after a troop transport then the Necron Ghost Ark is the perfect vehicle for the job. Alternatively, should you wish to obliterate your foes from the face of the planet, then the Doomsday Ark and it's under-slung Doomsday Cannon are the right tool for the job. This kit comes with one two small flying stems, one large flying base and two Necron transfer sheets. This kit is supplied unpainted and requires assembly - we recommend using Citadel Plastic Glue and Citadel Paints.