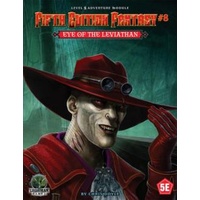 A level 8 adventure for 5E

Fifth Edition Fantasy is here! This adventure module is fully compatible with the fifth edition of the world’s first fantasy RPG, and is ready to play in your home campaign!

Murder! Ripples of shock pour through the wee hours of the sleepy fishing shanty of Port Scuttle. An innocent young fishmonger, beloved by the locals, has been brutally murdered in her own shop. Stunned by the grisly act, the typically hardened townsfolk turn to powerful heroes to investigate the gruesome deed. Could the fishmonger’s recent discovery of a massive black pearl be a possible motive? The heroes’ goal is to not only bring the perpetrator to justice, but determine the twisted purpose behind the ghastly act. Concerned townsfolk decry that the evildoer must hang for his or her despicable crime. Yet when the heroes finally track down the murderer, he is already dead by the noose, and the investigation has truly only begun. Clues hint at even darker designs, as an ancient evil stirs to reclaim a once lost malevolent relic.