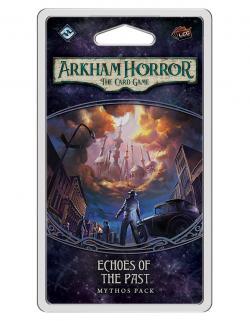 Arkham Horror LCG: Echoes of the Past Strange is the night where black stars rise,
And strange moons circle through the skies,
But stranger still is
Lost Carcosa.
–“Cassilda’s Song” in The King in Yellow Act 1, Scene 2

Fantasy Flight Games is proud to announce Black Stars Rise, the fifth Mythos Pack in The Path to Carcosa cycle for Arkham Horror: The Card Game!

Your investigations have led you far from that fateful first showing of The King in Yellow at the Ward Theatre in Arkham. When you could no longer find the answers you needed in Arkham, you voyaged across the Atlantic to France and entered the catacombs of the dead beneath Paris. Now, you travel to the island commune of Mont Saint-Michel, as brooding, dark clouds cover the sky. A storm is coming—and it’s unclear if our world will survive.

Black Stars Rise offers the latest chapter in The Path to Carcosa cycle, and the latest tale of your own madness. You have looked upon the face of the Stranger. You have beheld the Pallid Mask and the Tattered Cloak. New player cards arrive in this Mythos Pack, cards with palliative names like “Stick to the Plan,” “Narrow Escape,” or “Ward of Protection.” Their names are a lie, dripping with false comfort that only the truly mad will embrace. The darkling spires of Carcosa are breaching the walls between dimensions and Hastur will rule over all…

You have had cause to doubt your sanity before. The choices you’ve made along your path have been questionable, at best. Can you be sure that you’re seeing reality? If you can still think logically, you may apply Occam’s Razor. Surely it is far simpler to believe that you have gone insane rather than supposing that the entire world is slowly falling under the sway of a dark god from another dimension.

Of course, it’s far too late for you at this point. The storm is brewing and bursting above your head, with pelting rain coming down from above and the tide inexorably rising from below. As your tiny steamer takes you out to the island monastery of Mont Saint-Michel, there’s no turning back for you.

Make no mistake by letting yourself fall into hope as you approach the island. No matter how grim things have looked in the past, you’ve always had the act deck—a singular flicker of light in even the darkest hours. The act deck holds an implicit promise: if you can find a way to advance through the act deck, you have a chance to survive. Things could turn out alright in the end.

With Black Stars Rise, your madness reaches new depths. There is no act deck, nor any light in the darkness. At the beginning of the game, you’ll set up one agenda deck as normal—and in place of the act deck, a second agenda deck. The first agenda deck represents the rising tides and flood waters smashing against the sea walls. The second agenda deck corresponds to the monstrous storm lashing the island, its clouds coruscating with eldritch energy. Nothing remains for you, except to choose how you and your friends will meet your demise. And even if you could somehow find a path through the madness and the gate to Carcosa, the floods or the storm would surely destroy you before you could reach it.

For you and your fellow investigators, few things push your sanity further to the limit than the Spells that you use to toy with uncanny powers far beyond your control. At any moment, these barely-understood incantations could slip away from you, lashing your mind with horrors or unleashing fresh demons upon the world. It’s fitting, then, that as Black Stars Rise draws the tattered robe of insanity close about your shoulders, it delves deeply into Spells.

Traditionally, Spells have been the purview of the Mystic class. Still, as Lost Carcosa pushes closer to Earth, Arcane Insight (Black Stars Rise, 266) can spill over into the minds of even the uninitiated, pulling back the shroud of this world and revealing clues that would have gone unseen. Rogues, on the other hand, may find that their natural powers of misdirection and Suggestion (Black Stars Rise, 268) have been amplified, giving them a tool to avoid attention and slip away from even the most dogged pursuers.

Mystics do not go wanting either. The surplus of unnatural, otherworldly energies washing over the world has created a surplus of new converts, such as the upgraded version of Arcane Initiate (Black Stars Rise, 271). The horrors these young Sorcerers have seen—and perpetrated—have brought more doom on the world or pushed them to the brink of insanity themselves. But their skills may be sufficient to bring you the Spells that you need to buy a few more moments before you inevitably succumb to the suffocating control of Hastur.

The power of these Spells is undeniable—but their very power pushes you farther into your doomed spiral… into the realms of madness. These Spells cannot create a path forward where none exists. They will not conjure an act deck out of nothingness to lead you into Carcosa. But perhaps, in spite of everything, you will continue to struggle onward. Perhaps you will say, in the words of the Survivors, "Not without a fight!" (Black Stars Rise, 272).

The Black Stars Are Rising

There is no escape. You are doomed.