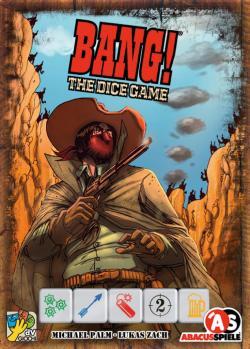 This expansion adds eight new enraged gunslingers and two new duel dice for fighting duels. If you lose a duel, you must draw a duel wound token. During your turn, each duel wound token you have cancels one identical symbol rolled on a die that you decided to keep.

The new dice also feature another new symbol: the whiskey bottle. If you roll a whiskey bottle during your turn and you have no duel wound tokens to discard or if you lose two or more life points in one turn, you must draw a rage card; the symbols on those cards are added to the results of the dice!

With four or more players, you can play the "Undead or Alive" module, which adds a deck of boneyard cards. If the boneyard overflows with corpses, a zombie outbreak might begin!