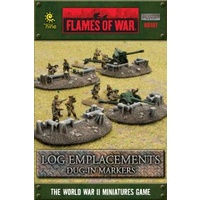 8 tabletop-ready Dug-In Markers, suitable for use with any army on the Eastern or Western Front. Markers are provided prepainted. Miniatures, scenery, glue and paint not included.

These markers are ideal for showing which of your teams are dug-in. Also during assaults when your troops may leave their foxholes to finish off the enemy you can leave the markers in place for your troops to return to.

Though it is a miserable experience to dig a foxhole one minute and leave it the next, sometimes it has to happen. Unfortunately, even if you return to the same location later, the tactical situation is likely to have changed and you will have to dig new positions.