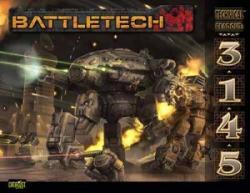 Manufactured on Regulus by Tactical Advantage, LLC, the Neanderthal was an attempt to embody the performance of the fearsome Lyran Berserker in a 'Mech twenty tons lighter. The concept went beyond simply echoing the Berserker - Tactical Advantage used a typical Regulan sense of flair in the design, producing a fearsome close-combat machine.[1]
The Neanderthal had a distinctive, blocky silhouette, and its prowess in close-quarters gained the 'Mech a notable - and intimidating - reputation. While the Neanderthal lacked the payload of the heavier Lyran 'Mech, the Neanderthal was capable of operating for longer as it didn't run the risk of the MASC failures that plagued the Berserker. Moving at speeds of up to eighty-six kph under normal conditions thanks to a massive LTV 400 extra-light fusion engine, the decision by Tactical Advantage to use Triple-Strength Myomer in the Neanderthal gave it the ability to reach almost a hundred kph when running hot.

The Garrett C22A communications software installed aboard the Neanderthal was augmented by a Guardian ECM Suite mounted in the center torso, making the Neanderthal a harder target to hit and giving it more time to get up to speed before charging into the fray.