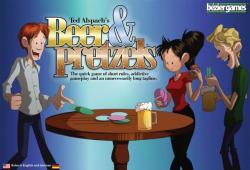 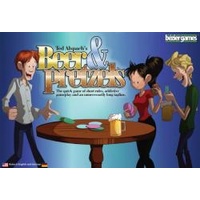 Let’s say you‘re hanging out with friends and want to play something fun and light. Agricola? No, it's a bit too heavy and the whole farming thing is way too laden with innappropriate farm animal jokes. Twister? No, and certainly not if "Hairy Susan" is going to be playing...yuck. In fact, most games just won't fit the bill. But Beer & Pretzels will, for no other reason than it sounds like it might be a beer & pretzels kind of game. You're probably thinking to yourself, "gee, what a coincidence."

Beer & Pretzels lets you throw coasters and get money for doing it. How cool is that? Pretzel coasters give you money based on the type of pretzel. Beer coasters double your money. And Napkins clean up the mess by covering up other players’ Beer and Pretzel coasters. It's fun, it's fast, and oddly compelling to the point where the Betty Ford Center has already set up a new wing to treat the masses who will become Beer & Pretzels addicts after the game is released this fall.

Game Contents: Enough Beer coasters, Pretzel coasters and Napkins for up to five players. And these are real coasters too, so they can double as a place to put your drinks without even impacting gameplay all that much. Dozens and dozens of $5 and $1 coins (in fact, you’re making a ton of money just by buying the game), and a high tech Boundary Line, erm, string. And really easy rules. We could have put the rules right here, they’re that short and easy, but the marketing folks said we had to provide “flavor” text on this page instead, whatever that means.