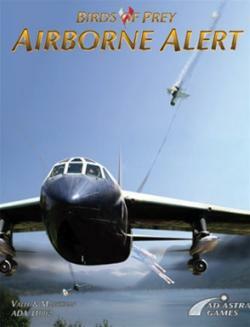 Birds of Prey is a revolutionary game of dogfighting in the jet age. Air combat is the ultimate three-dimensional environment and Birds of Prey captures that three-dimensionality like no game before. With a consistent flight model that works the same whether you're turning in the horizontal or in the vertical ("looping"), Birds of Prey avoids the rafts of special rules that made other air combat games difficult to learn and prone to player error.

Enter the world of jet dogfighting, where powerful afterburners glow bright, steely-eyed pilots strain against crushing G forces, and cutting edge weapons systems deal death in the close-in knife fight. The Deluxe Edition includes a double set of box miniatures and two additional Aircraft Control Cards, allowing a four-on-four furball, as well as a full-color tutorial book. Because the lavishly illustrations of the tutorial book include many images of the color play aids, the Deluxe edition makes it easier to learn the game.