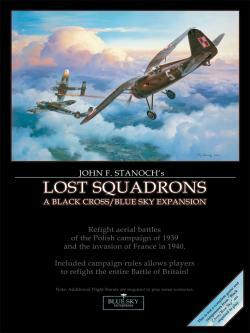 From its conception, the Blue Sky Game Series was designed to be an expandable system that would allow players to simulate and explore the challenges of aerial warfare throughout the 20th century. Using a core set of rules that are revolutionary yet easy to learn, players can command squadrons of planes on the board without the tedium of record keeping.

Because of this, Black Cross / Blue Sky has been well received by gamers throughout the world. In keeping with this design philosophy, Blue Sky Enterprises now introduces the next installment in the Blue Sky Series - Lost Squadrons.

With this supplement players can now field Polish, French, and Dutch aircraft.

So put on your parachute, and remember to bring your foreign language dictionaries, for there is a battle to be won over the skies of Europe!

This is not a complete game, a copy of Black Cross / Blue Sky is required to play