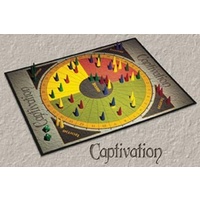 Be the first player to move all your cones around the board and into your home. Captivation plays like pachisi. Like pachisi, and unlike backgammon, everyone moves in the same direction. Two cones of the same color on one space are safe, however a single cone can be "captured". When you land on a space with only one cone of another player on it, you stack your cone on top of it and trap it. Until you move that cone again, her cone can't move.

"A captivating game for two-four players that can be played in 30-60 minutes."