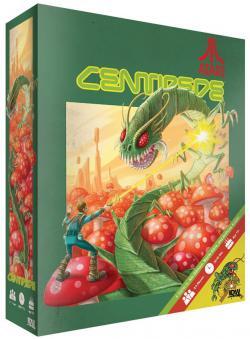 Wandering into an enchanted forest, a wayward garden Gnome finds itself surrounded by succulent mushrooms, however, the mushrooms aren't alone – roaming this enchanted forest is a ravenous Centipede! Armed only with his wits and trusty magic wand, the Gnome must beat back the advancing Centipede and its army of beastly bugs!

In Atari’s Centipede, designers Jon Gilmour (Dead of Winter), Nicole Klein, and Anthony Amato (Laser Ryders) have 2 or 4 players venturing into the world of classic arcade gaming. On one side, a player controls the Gnome, exploring the forest and trying to defeat the Centipede. On the other side, the Centipede player, eager to destroy the Gnome, must wiggle its way to the other end of the board.

The Gnome player rolls and spends their dice to perform actions, while the Centipede player uses a deck of cards to spawn Fleas, Spiders, and Mushrooms, trying to control the game board. Players are armed only with their wits in this race to eliminate their opponent, take control of the enchanted forest, and win the game.