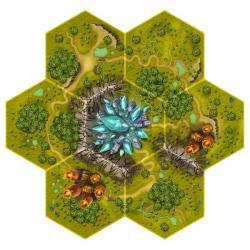 As far as we can remember, Elves always dominated the world. But their time is drawing to an end as the decline is near. From the Bohorg's tribe to the Steamfield Barony, along with the Godleif's clan and the army of the Tomb, every clan is secretly arming itself to conquer the elven cities and the precious crystals they hold; crystals being the only way to forge the powerful legendary equipment.

Clash of Rage is a miniatures game of conquest and movement in which different clans will fight for victory. Every army is unique, with its own units and characteristics. Players will equip each unit as they see fit, buying weapons and armour so that every game will be different!

Overcoming the Elves will be the first necessary step to victory, but the showdown with the other clans is bound to happen!