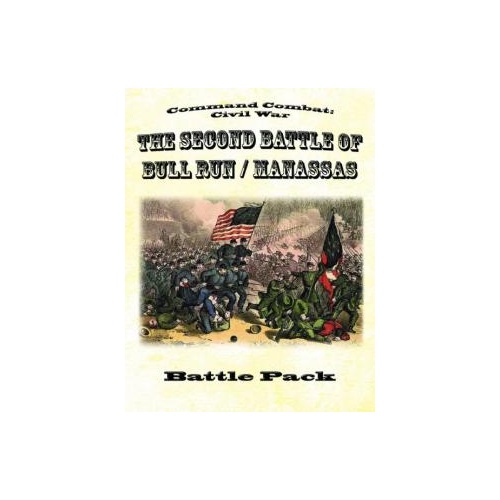 The second battle of Bullrun / Manassas

Ride to battle as General Thomas "Stonewall" Jackson as he holds the Union army in place long enough for Lee to give the killing blow on the old
Manassas battlefield, or take the role of General Pope, trying to crush Jackson once and for all before his reinforcements can arrive.

Within these pages, you will find rules for playing the three days at the Second Battle of Bull Run/Manassas, beginning with the action at Brawner's Farm, continuing with the second day's fighting at the unfinished railroad, and climaxing with the cataclysmic flank attack of Longstreet's corps on the third day as the Confederates tried to destroy Pope's army; all utilizing the Command
Combat: Civil War rules, which gives the player the feeling of actual command during the age of muskets. Instead of maneuvering each unit however the player wants, he sends out color coded commands, each one giving the various units advantages and restrictions based on the order. Command Combat: Civil War also provides specialized rules for specific generals in the war, each one reflecting the general's individual style of leadership.

This is a miniatures game, meaning players build their own armies and terrain, but cut-outs are provided for those who wish to get started right away.