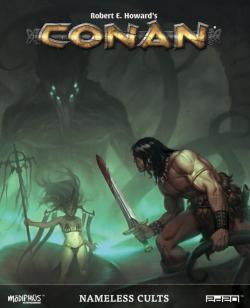 This sourcebook describes the major deities of the Hyborian Age such as Crom, Bori, Mitra, the Serpent god Set and minor gods such as Asura, Derketa and Bel in detail, including their cults, churches, rituals and traditions, servants, high priests, sacred rites, holy places, divine magic, artifacts, relics such as the Bone Rattle of Jhebbal Sag.

- New cult member archetypes with stories and backgrounds and suggestions for playing the faithful.

- Includes lore about the Old Ones such as Cthulhu, Yog Sotthoth and Nyarlathotep created by HP Lovecraft and intergrated into Howard`s Hyborian Age.

- Write ups of allies and foes such as Thog the Mighty.