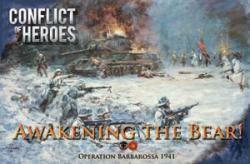 The year is 1941. Germany has defeated Poland, Denmark, Norway, and France with ease and turns its gaze further eastward to the USSR. In the morning hours of June 22, over 3 million German soldiers attack Soviet forces along a 1600 kilometer front, heralding the beginning of Operation Barbarossa. With this clever maneuver, the Germans have come by complete surprise, striking deep into Soviet territory. The German high command thinks the Soviets will fold like a house of cards; Stalin has massacred the Soviet officer cadre, training is poor, and their troop morale is low. Bolstering this perception, the Soviets proceed to lose an astonishing 1.75 million men during the first two months of engagement.

The Germans are unstoppable, their Panzers push to the very gates of Moscow. Then, winter hits, and the bitter cold saps the Germans of their resources, strength, and morale. Seeing opportunity, the Soviets strike back and the momentum of the war begins to shift.

The Soviet bear has awakened!

Conflict of Heroes: Awakening the Bear! is the first game in the Conflict of Heroes series. This series is a squad level combined arms training game used by history fans, universities, and military personnel throughout the world.

Awakening the Bear! - Russia 1941-42 takes you to the eastern front during Operation Barbarossa, the German invasion of Russia. Many consider this time period to be the birth of modern warfare tactics that continue to be used and perfected by today's modern armies.

Much effort went into distinguishing the units in the game by highlighting their historical strengths and weaknesses. For example, each tank's defense rating takes into account relative armor thickness, armor slope deflection percentage, speed, size, targeting mechanics, and crew training. All these factors are represented in an easy to learn target number system. You do not have to worry about the details; they are all built into the system! As the commander, you concentrate on tactics to execute your mission and firefight objectives.

Each firefight can be played dozens of times, exploring different tactics and use of available forces with every play-through. In Awakening the Bear, the Soviets have superior tank armor and firepower, which the Germans counter with integrated combined arms and communication nets.

The Programmatic Instruction Rule Book is only 11 pages long and is taught in sections. You read a few pages, and then play two firefights. The next few pages add more advanced unit control and arms to the game and instruct you on how to play the next few firefights. As you progress through the game, you will face more challenging tactical situations. The rules do not become more difficult, but the decisions you must make do!

"For those who haven't gotten on board with Conflict of Heroes, [Awakening the Bear] is the perfect jumping on point and ranks up there with titles which need to be on your gaming shelf." ~Jeff, The Gaming Gang