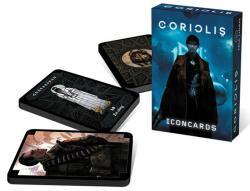 Crew a space ship and travel the Horizon. Explore the ancient ruins of the Portal Builders, undertake missions for powerful factions, and partake in the political intrigues on Coriolis station. From the Monolith in the jungles of Kua to the floating temples of Mira, the Horizon is yours to explore!

Coriolis: The Third Horizon was awarded the ENnies Judges’ Spotlight 2017 and is produced by the makers of critically acclaimed Mutant: Year Zero (six-time nominee and winner of a Silver ENnie for Best Rules 2015). Features: